Roasters, bakers and artisan taste makers. That’s how the ‘Soho Coffee Co’ describe themselves on an oversized wall painting, visible as soon as you enter their new coffee shop.

Found on Kingsway, in one of London’s busiest office-dwelling areas, SoCoCo — as I will refer to it henceforth — is perfectly positioned to capture the student and office worker markets. That is, if it could sort it’s arse-end from its elbow.

The venue initially set a good impression. It’s spacious. It’s clean. “It’s a mix of contemporary barn and urban chic”, as David eloquently put it. It’s actually incredibly similar to the aesthetic of a Pret A Manger, from the tiny, two-seater tables, to the large, open fridges filled with sandwiches and drinks visible from the entrance.

None of this is a bad thing: the venue manages to pull off a confidence and quality in appearance that larger chains usually offer, whilst presumably being a far, far smaller company than its closest competitors. If anything, it bests other chains on aesthetic.

If there’s one complaint from me on the venue itself it’s that it’s freezing cold. Some heating, or just closing the door, would benefit everyone greatly, I think. Overall though, the first impressions were good. 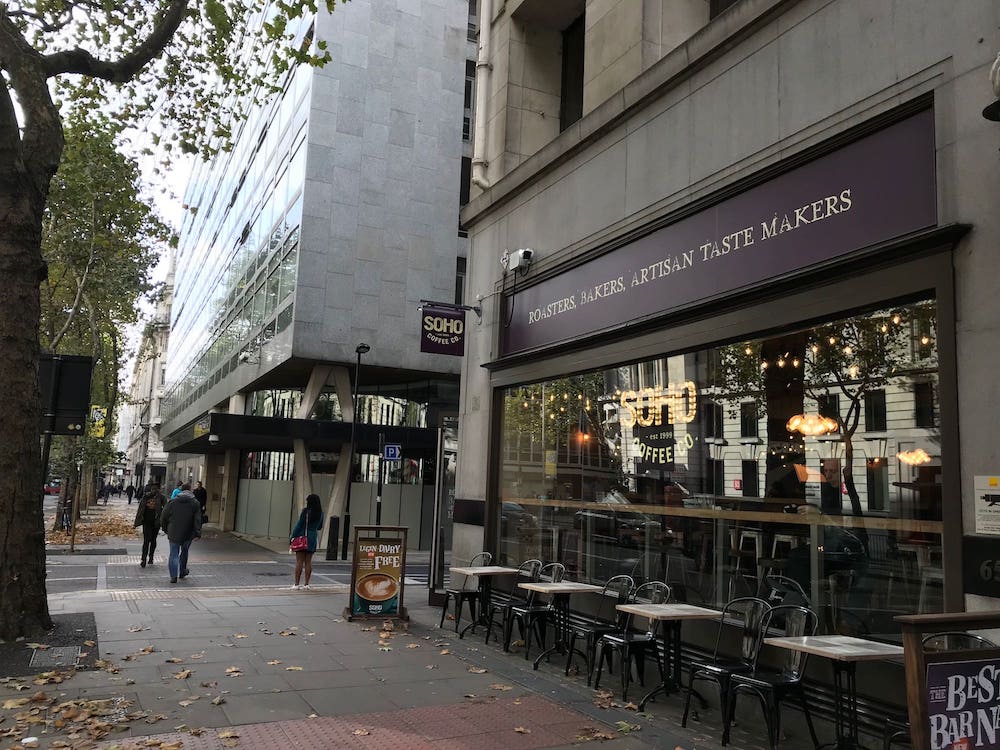 First impressions count, but when a good first impression is followed by a cacophony of errors, they quickly fade into irrelevance. Which brings me to the ordering process.

I’ll go right ahead and say it: the utter chaos that was the service in this coffee shop was so bad that I won’t be coming back.

I’ve written about queuing systems in shops before, and how the aim should be to optimise end-to-end service times, not just the time at each stage. SoCoCo have neither optimised for flow, nor the parts.

Initially all seemed calm. We perused the sandwiches in the fridge, and whilst taken back by the exceptionally high pricing, found something we liked the look of. That’s where calm died.

Upon joining what we thought was the queue, no one, neither the baristas nor the other customers, could fathom who was next. There were 3 people behind the counter: one on the till, one on coffee, one on everything else. We handed over our sandwiches for toasting, when we thought it was our turn, and gave our coffee order. The server was brisk, and barely let me finish a sentence before she blasted onto the next part of the process. Strike 1.

More customers were coming through the door, adding to the total orders, but the outputs were being produced at an ever slower rate. I was directed to one side of the counter for coffee, and the other side to collect the food. I had neither in my possession, and it was not clear at any point which would arrive first. I was repeatedly told to stand at the opposite end of the counter despite having needs to be at both ends at once. Strike 2.

The sandwiches eventually arrived, but then the coffees did not.

There was at least a 5 minute wait from there in. The barista forgot my order, twice, and could not fathom that the person behind me had ordered 2 tall lattes, whilst I ordered 2 grande lattes. It even caused an argument between the baristas. Meanwhile, my sandwiches, now toasted, we’re going cold. Strike 3.

I say this with no exaggeration: it was the worst experience I have ever had in a coffee shop. Eventually, we got all the components of the order together, and found a table. Unsurprisingly, given the shit-show customer service, there was plenty of space.

Our order was 2 lattes, a beetroot, Brie and horseradish sandwich, and a barbecue chicken sandwich, both on sourdough bread.

The sandwiches were actually very good; in particular the beetroot one which had just the right balance of everything (and I say this as someone who is neither a Brie nor a horseradish fan). The coffees, equally were quite pleasant, with a sweet taste to the coffee itself and appropriately frothed milk.

But it didn’t matter. By this point, I was done with the establishment. They had so thoroughly ruined what could have been an enjoyable visit that no quality of food and drink could redeem it.

Worse, compared to a Pret A Manger, virtually everything was more expensive. So not only was the service worse, but you paid more for it too.

The Soho Coffee Co. claim to be “roasters, bakers, and artisan taste makers”. It’s literally printed on their walls. But despite some good products, the overall service ruined our time in the venue. I think a more accurate motto for their walls would be “dithers, flakers, and botched service fakers”.