Coffee Island is not on an island, nor is its interior decorated as though it were, but it does, at least, serve coffee. Very good coffee, in fact.

Based mere spitting distance away from Leicester Square tube station, wedged between Seven Dials, Covent Garden and the famed cinema strip, Coffee Island is, we understand, the only coffee shop owned by the coffee roastery of the same name. It’s mission is to created “a perfectly engineered coffee”, and it doesn’t disappoint.

The venue itself is the coffee equivalent of Willy Wonka’s Chocolate Factory. From floor to ceiling, the entire space is ladened with intricate coffee machinery and technology, all aimed at serving a great cup of Joe. I don’t know the names of any of these pieces of equipment, and I won’t try to pretend like I do: but needless to say, there are a lot of them, and they look freaking cool.

The first impression of the venue itself is, well, impressive. The elaborate, technology-festooned counter is in the middle of the large warehouse-esque room, and the space is equipped with a ground and mezzanine floor.

The chink in the armour here is the seating. There are just too many damned chairs. Even on a table barely big enough for 1 person on either side, the Coffee Island crams 4 chairs around it. It’s very uncomfortable: much like I imagine being washed out at sea on a raft in search of a desert island might be.

There was a healthy dose of pretence to the ordering process, with a good amount of authenticity. It was “clearly very hipster”, according to David as he eyed up the chocolate cake he plonked down on the table.

Basically all you need to know is there are oodles of theatrics in both the venue and the coffee creation process.

We each had a slice of chocolate cake. I had a flat white, David had a latte. 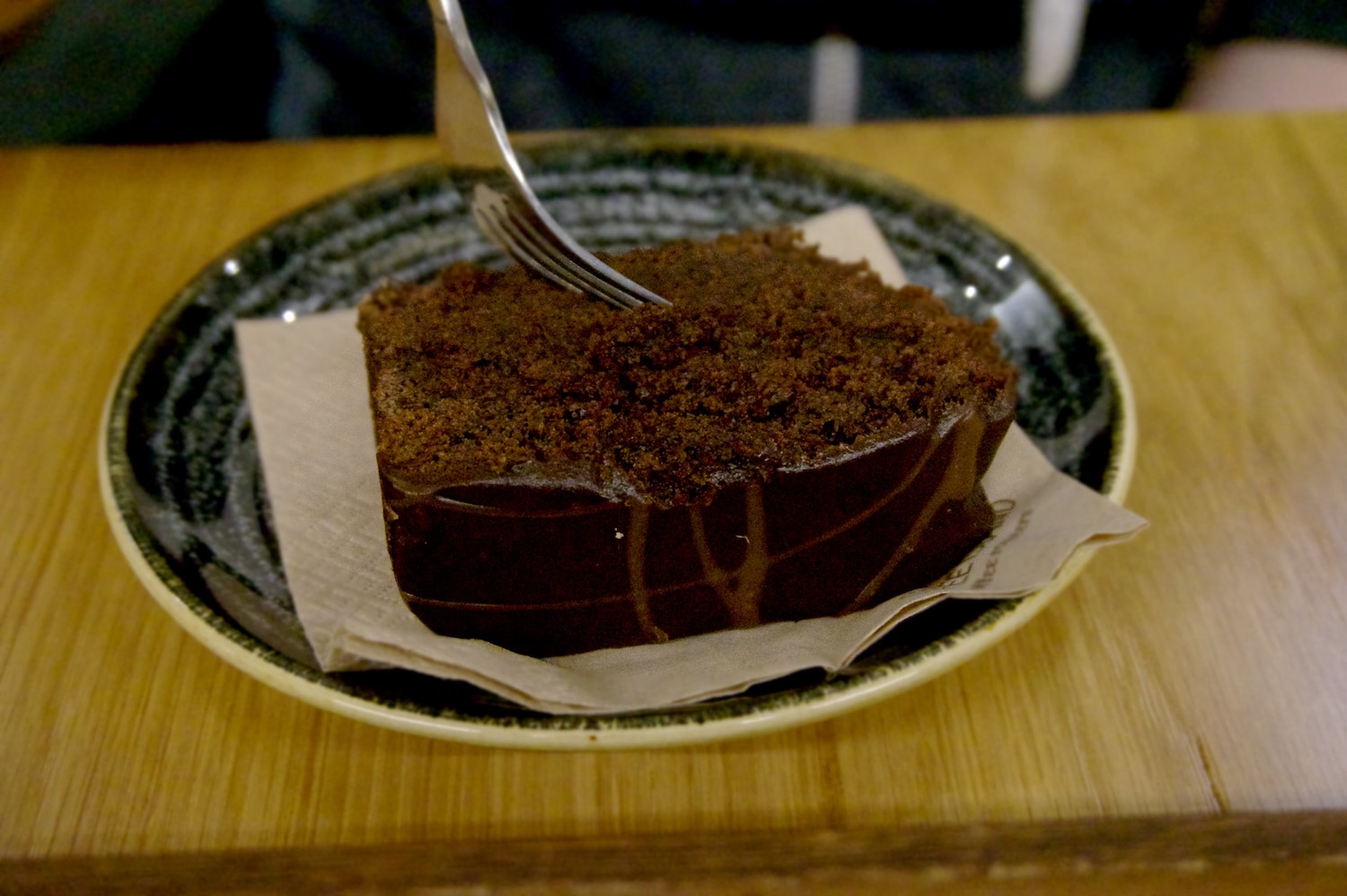 The chocolate cake immediately lost points from me for presentation. It was served on a paper napkin (and a plate, obviously). For as long as I live, I will never understand why shops serve cake on a napkin. It’s ridiculous: all it does is mean I loose half my icing or topping because it sticks to the blooming napkin! Coffee shops, take note, you’re on my list if you do this.

Napkins aside, the cake was very nice. Not too stodgy, not too crumbly, and a good, hearty amount of chocolate in the bake.

As for the coffee, it was a fruity blend of beans. There were hints of blueberry, strawberry and raspberry in there, and the overall tone was one of sweetness. The milk was heated perfected, giving the overall body a smooth and silky texture.

The tech used to make the coffee in this shop is definitely some kind of voodoo magic. It’s definitely worth a try: though you might want to avoid sitting in, and go for a takeaway.