There’s probably a Pret A Manger on every high street in London, and many more streets besides.

From a single shop based in Hampstead in the early 80s, Pret has become a national behemoth of lunch time treats. It’s a bizarrely consistent chain considering that most of the dishes are made from scratch on site. So consistent in fact, that you’d be hard pushed to find a dodgy Pret. Certainly that was true of the Pret we tried on High Holborn.

One of at least 3 stores within a 5 minute walking distance, this Pret was eerily quiet. Holborn is one of the most densely populated areas of London during the week - more people work in the area than almost anywhere else in London - but not on this day, because this day was Sunday.

Ordering was a largely straightforward. There were only a limited selection of sandwiches on offer; no doubt in part because we were a little late compared to our normal lunch time, and partly because it was a Sunday. We found something we liked from the toastie section though: a ham, cheese and mustard one for me, and a brie and avocado one for David.

We were able to go straight to the till, order our coffee and have our sandwiches toasted at a good clip. Not exactly fast food, but quick enough.

The venue itself was a classic chain affair. Cheap furniture, crammed into places no one would ever be able to fit themselves in order to make the most economical use of space. It was hardly fine dining, but then again, that wasn’t what we were after: we wanted a quick snack with some good coffee.

We chose some high stools facing out on to the street so that we could, as usual, be nosey and judge passers by for all manner of faux pas.

Both David and I agree that this was very much a bog standard affair. Both David’s standard latte and my soya flat white had a sweet taste with hints of vanilla. This may have been exacerbated by a general sweetness of the milk, but we couldn’t quite tell. The body of the coffee was light and silky. Overall, nothing stellar, but nothing to complain about either. 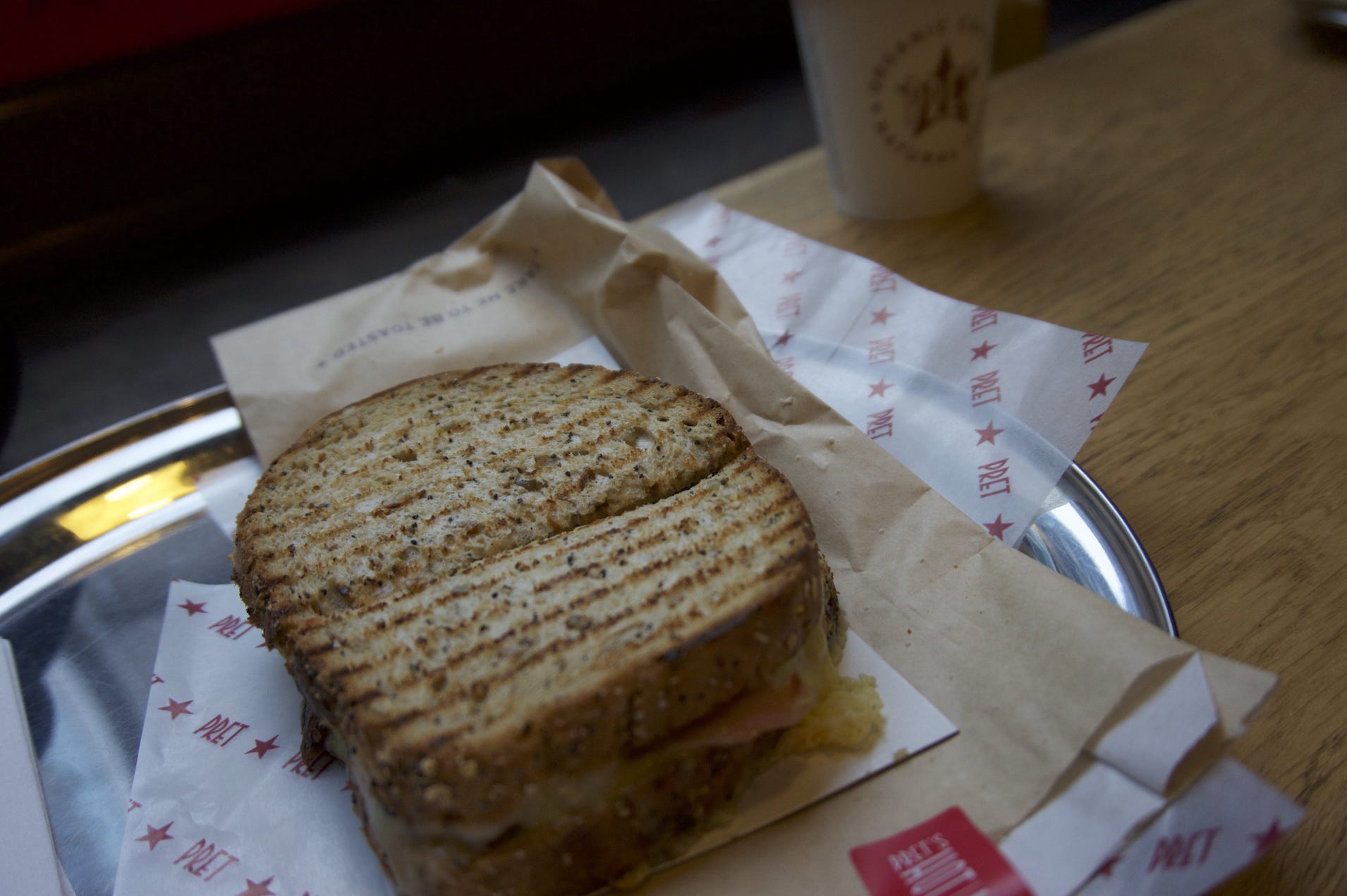 The food was equally a standard affair. “It’s tasty,” was about as much of a description as David could muster on this occasion: I think he was just grateful to be eating anything after too long a gap between meals. He gave his brie and avocado toastie a 4 out of 5. My ham, cheese and mustard toastie was a little heavy on the mustard for me, but not enough to ruin what was otherwise a pleasant sandwich. It filled a hole, at least.

David also had a packet of crisps - sea salt and cider vinegar flavour - and naturally, I stole some. Once you get past the pretentious flavour naming, they weren’t bad. They could have used a little more salt for my palette, but David was happy enough with them.

You can’t really go wrong with a Pret lunch. The coffee won’t blow you away, but it’s dependably good enough. The food is the main attraction in this chain, after all (it’s kind of in the name). We weren’t trying the coffee for the novelty, of course; we wanted to establish a baseline for a decent, bog standard coffee. And that’s exactly what we’ve done.